My Cousin the Congressman

Having grown up in a politically conscious family with a deep interest in history and books, I was very excited to discover a hitherto unknown branch of my Kirkpatrick family tree several years ago. This branch has proved to be extraordinarily rich in detail about our earliest years in America (our Kirkpatricks arrived in Newcastle, Delaware, in 1736).  By the time we get to the first and second generations born on this side of the pond there are many surviving letters, journals, portraits, and even a good number of books (collected sermons, family histories, and a handful of novels!). Clearly there is a lot to blog about. But as I don't have a lot of time today to introduce the entire Kirkpatrick family, I will instead introduce you to my cousin, the Congressman.

Littleton Kirkpatrick (1797-1859) was elected to the U. S. House of Representatives from the state of New Jersey in 1843. He is my second cousin, six times removed. He was a Democrat. While he only served one term in Congress he continued to be very involved in New Jersey politics. He was Mayor of New Brunswick, New Jersey, from 1841 to 1842, and served as a trustee of Rutgers College from 1841 until his death in 1859.

Littleton's mother, Jane Bayard Kirkpatrick (1772-1851), had come from an important Washington, DC, family, and was a well-educated woman. She kept a journal (big chunks of which survive) for much of her life. And after her death a selection of her writings was published which included a novella, The Light of Other Days (1856).

Alas, while I have found a portrait of Littleton's father I have not found any paintings or photographs of Littleton. One would think such must exist. But I did recently acquire a letter signed by him, which I will share below. 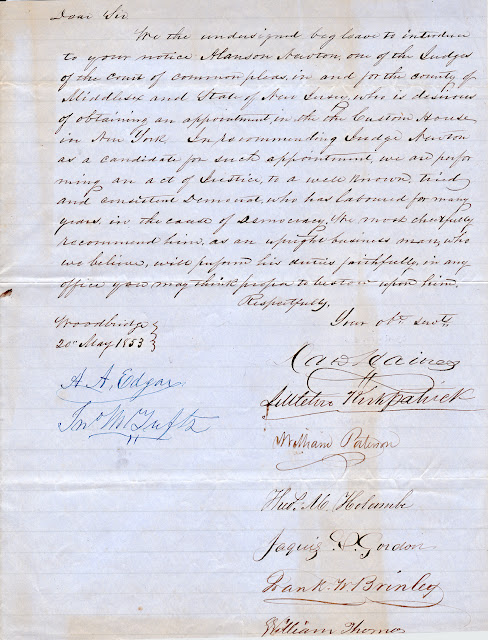 We the undersigned beg leave to introduce to your notice Hanson Newton, one of the Judges of the court of common pleas, in and for the county of Middlesex and state of New Jersey, who is desirous of obtaining an appointment in the Custom House in New York. In recommending Judge Newton as a candidate for such appointment, we are performing an act of Justice to a well known, tried and consistent Democrat, who has laboured for many years in the cause of Democracy. We most cheerfully recommend him, as an upright business man, who we believe, will perform his duties faithfully, in any office you may think proper to bestow upon him.

Littleton Kirkpatrick [and others]


I've tracked down a few of the other signers: A. A. Edgar was a member of the Board of Health, and member of the New Jersey State Senate. Frank W. Brinley was the "Collector of Customs." Other unidentified names are: John M. Tufts, Thos. M. Holcombe, Jaquis H. Gordon, William Thomas, and a Mr. Haines (first name indecipherable) who boldly signed above Littleton's name.

But the most interesting other signature belongs to William Paterson (1817-1898), who signed directly below Littleton. His grandfather, William Paterson (1745-1806), was a signer of the U. S. Constitution as well as New Jersey's first U.S. Senator, second governor of New Jersey,  and a justice on the U.S. Supreme Court (appointed by George Washington in 1793). And Paterson, New Jersey, is named after him.

The Connections between the Paterson family and Kirkpatrick family began early. Littleton's father, Andrew, had studied law in the office of the elder Paterson. The two families seem to have remained good friends.

And, in turn, the William Paterson grandson (who signed the above letter) studied law in the offices of Littleton Kirkpatrick. He was admitted to the New Jersey bar in 1838. He was elected to the state Assembly in 1842 and 1843. In 1847 he became Deputy Director of the Internal Revenue, and again in 1857. In 1882 he was appointed Judge of the Court of Errors and Appeals of New Jersey, a position he held for seven years. From 1846 to 1875 he served as Mayor of Perth Amboy.

While I have found no family connection to the Paterson family, it is this rich tapestry of historical connections that makes me so fond of this branch of the family. So much more to explore!