My first cousin twice removed Charles Arden Muehleisen passed away on July 11, 2013, at his home in Cortland, Ohio.

Charles was born July 11, 1920, in Cuyahoga Falls, Ohio. Our common ancestors were his grandparents William Malcolm McNaughton (1850-1914) and Mary Elizabeth Grant McNaughton (1856-1946), his mother's parents. They were my great-great-grandparents, my father's father's mother's parents. By profession Charles was an architect and ran his own firm for twenty-five years, before retiring in 2001. He served in the US Army in World War II and was active in several community organizations, including the Warren (Ohio) Rotary, the Boy Scouts, and the First United Methodist Church of Warren. I never met him.

Charles married Peggy E. Patton (1918-1992) in 1948. They had two daughters, Debra Elayne Muelheisen Rodriguez, who passed away in May 2012, and Beth Arden Muehleisen Ensign, who put together with her niece Barb Rodriguez and her son Andrew Ensign a lovely memorial video, which you can view here.

A memorial service was held on July 18. The family suggests memorial donations to the First United Methodist Church of Warren, 309 N. Park Avenue, Warren, Ohio 44481, or to The Rotary Club of Warren, P.O. Box 68, Warren, Ohio, 44482.
Posted by ericshanower No comments: 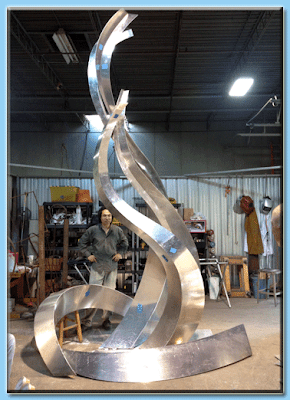 Funds for the sculpture itself are in place, but additional funds for the base, the security system, and the lighting still need to be raised. Any amount you might wish to donate is welcome. The names of all donors at any level will be recorded in a memory book at the Finnish Heritage Museum. Donors at the $250 to $499 level will also have their names listed on a plaque outside near the sculpture. Donors at the $500 plus level will have their names listed on that plaque in larger type. Click here for the online donation form.

I have strong connections to Fairport Harbor, Ohio. Many of my maternal relatives were immigrants from Finland who ended up in Fairport. I've visited Fairport many times and still have many relatives there and in the area, including the current vice-president of the Finnish Heritage Museum, Ken Quiggle.

I'm proud to say I've written my check for a donation to the Spirit of Finland fund. Whether you're the descendant of Finnish immigrants to the USA or interested in preserving immigrant history or simply an art lover, I hope you'll consider donating, too.
Posted by ericshanower No comments: