Sometimes family stories preserve only a hint of truth while shedding pertinent details as the years pass. That was the case with the story of Charles Chalmers "Charlie" Shanower Hinman, my great-great-uncle.

The story as it has come down to me was that when Sophia died, some of her children were adopted by other families. There were so many children and the family was so poor that childless neighbors took in some of them. Although the dispersed children took the last names of their foster parents, there was no indication that their Shanower origin was forgotten. Photographs of Benjamin Franklin Shanower’s adult children include those that were adopted by others—none of the children went missing.

But those photos are misleading. That’s not quite the real story.

It’s true that Benjamin Franklin Shanower had a lot of children, eleven in all—not unusual in families of the late nineteenth century. But eleven is still a lot of mouths to feed. It might seem sensible to farm out a few of the kids. However, there were only four children when Sophia, their mother, died. So the idea that the family was overcrowded doesn’t stand up.

Still, four motherless kids on an Ohio farm with a father who probably had to work from dawn till dusk was probably a strain on resources. So at least two of the children went elsewhere. 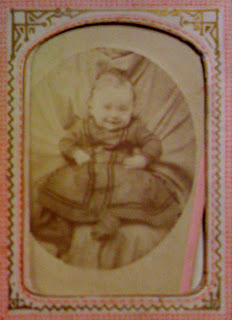 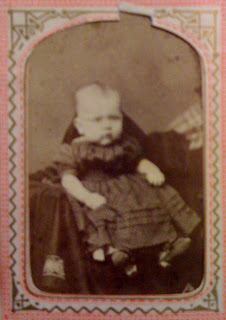 I have no indication that William, the first child, and Jennie, the third child, left their Shanower home as youngsters. But the second child, Mary, who was four years old when her mother died, was adopted by Samuel Benner (unknown-1906) and his wife Lydia Wenger Benner (1842-1916). The Benners lived near Smithville in Wayne County, Ohio, immediately west of Stark County where the Shanower family lived. There Mary Shanower was known as Mollie Benner.

The Benners were Mennonites and Mollie became a Mennonite, too, a religious sect her earlier Schonauer ancestors from Switzerland had belonged to. In 1894 she married another Mennonite, Christian K. Hostetler (1865-1935), in Orrville, Wayne County, Ohio. About 1895 they moved to Elkhart, Elkhart County, Indiana, where they had the first three of their four daughters. Christian was employed at the Elkhart Institute, a Mennonite institution and forerunner of Goshen College.

The younger brother of Mary “Mollie” Shanower Benner Hostetler, Charles Chalmers Shanower, was three months old when their mother Sophia died. Little Charles was placed into an orphans’ home in Massillon, Stark County, Ohio. Before long he was adopted by Methodist minister Rev. Chester W. Hinman (1825-abt 1904) and his wife Louisa Whittle Hinman (abt 1825-bef 1900), and taken to live in Black Brook, Polk County, Wisconsin, with the rest of the Hinman family. Rev. Hinman was minister of the Congregational Church in nearby Clear Lake, Wisconsin.

The Hinmans worried that young Charlie might be taken away from them by his birth family, so they insisted that the matron of the Massillon orphans’ home keep their identities secret. They concealed from Charles that they’d adopted him and claimed he’d been born in Michigan instead of Ohio. For a dozen years Charles believed the Hinmans were his biological parents.

Charles was three when the 1880 US Federal Census taker noted his adoption, so clearly the secret wasn’t kept all that well. When Charles turned thirteen he somehow accidentally learned that the Hinmans were not his biological parents. Maybe he overheard someone admitting the adoption to the 1890 US Census taker, as someone obviously did ten years before in 1880. In any case, Charles now knew that Chester and Louisa Hinman weren’t his real parents. But they wouldn’t tell him who his real parents were.

Meanwhile back in Ohio, Charles’s birth father, Benjamin Franklin Shanower, had remarried and had a slew of younger children. At some point, possibly in the late 1890s, Benjamin learned that a minister and his wife in Wisconsin had been the ones to adopt Charles. Benjamin informed his daughters Mary Shanower Hostetler and Jennie “Jane” Shanower, Charles’s sisters. They were both living in Elkhart, Indiana.

I imagine that Mary especially would have wanted to seek out her brother, since she had experienced adoption, too. In late 1900 Mary’s husband Christian Hostetler took a trip to Wisconsin in connection with his job at the Elkhart Institute. I expect that Mary urged her husband to make inquiries in Wisconsin about her missing brother Charles. Christian did and learned that a certain Charles C. Hinman, a young man who clearly fit the particulars, lived near Clear Lake, Wisconsin.

Christian Hostetler must have had some specific information—maybe the name "Hinman" or a geographic location or both—to be able to narrow his search for Charlie so successfully. But the newspaper accounts I've gotten most of this story's details from don't supply that information.

However Christian did it, he put the pieces together and went to Charlie’s home, but Charlie wasn’t there. Christian couldn’t wait around for Charlie, but he was sure he’d discovered the right man. So afterward he wrote Charlie a letter, explaining that the Shanowers were looking for their son and brother.

Before Christian could return home to Elkhart, Indiana, from his Wisconsin trip, Charles received Christian’s letter and mailed a joyful reply to Mary and Jane, his sisters in Elkhart. They read Charlie’s letter in late November or early December of 1900, devouring the news of Charlie’s life. Finally, after twenty-three years, the long lost brother had been found!

After his wedding Charles C. Shanower Hinman reunited with his siblings and father. He met his father’s second wife, my great-great-grandmother Louisa “Lucy” Leifer Shanower, and her seven children, who were Charlie’s half-brothers and half-sisters.  Afterward he made sure to stay in touch with the Shanowers through letters and visits.

Charlie and Nellie Hinman seem to have had a child in 1909, but I have no name for it and I don’t know how long it lived. They moved to Saint Paul, Ramsey County, Minnesota, before 1910, and lived there for the rest of their lives. Charles was a car clerk and he and Nellie took in lodgers. Nellie died in 1955. Charles followed ten years later. They are both buried in Clear Lake Cemetery in Polk County, Wisconsin, where Charles had spent most of his Hinman childhood, unaware of his Shanower origin.

Just as Charles was missing from his birth family for many years, the story of what happened to him has also been missing, only for a much longer time. I can’t actually bring Charles back into the family fold like he was brought in 1900. But at least I can bring his story back again.
Posted by ericshanower