I Love a Piano

Today I'd like to explore the professional life of my maternal grandmother, Edna Kirkpatrick Mott (1897-1973). I often like to tell people that she was a Concert Pianist, but she had a more accurate (and funnier) description of her career: she told people she was "a Concert Pianist by profession, but a high-school music teacher by Depression," meaning, of course, that the economic crisis of the 1930s had forced her to shift gears. But I've no doubt that her classical music career was at least partially derailed by the fact that she divorced my grandfather, Robert E. Lee Mott (1890-1973), in 1928, leaving her the single parent of my mom, Mary Lee Mott Maxine (1924-2004), who was then three years old. For the record, my grandfather remained a part of both Edna's and my mom's lives after the divorce - both financially and as a father to my mom - but my grandmother had sole custody and the ultimate responsibility.

My grandmother had been born into a relatively affluent family in Bridgeport, Texas, in 1897. She was the only child of Louis Dillard Kirkpatrick (1873-1951) and Mary Campbell Kirkpatrick (1875-1966). The Kirkpatricks were firm believers in education. My grandmother graduated from Bridgeport High School in 1914 and went on to get a Bachelor of Music degree from Texas Woman's College in 1917 (now Texas Wesleyan University). She continued her study of piano after college. On October 27, 1921, she married Robert E. Lee Mott, my grandfather. The marriage lasted about seven years.

I believe for the first year after the divorce that my grandmother (and mom) may have moved back in with her parents in Bridgeport, though they also spent some time in McAllen, Texas, as well. But in the fall of 1929 my grandmother got a job teaching at the Fort Worth Conservatory of Music. It was a position where she could live at the conservatory with her four-year-old daughter, too. They moved into the Conservatory in the first days of October, 1929. The stock market crashed a few weeks later. She was busy teaching during the school year, but during the summers she took the opportunity to continue her own piano studies, taking Master Classes with famed pianist Edwin Hughes (1884-1965) in the summers of 1931 and 1932.

On March 19, 1933, at the height of the Depression she made her big debut. The Fort Worth Star-Telegraph announced the recital, even including a photo.

E. Clyde Whitlock reviewed the recital a few days later, saying among other things that the Beethoven Andante in F major was "one of the best played items on the program as to clarity of outline, melodic delineation, and rhythmic poise," and that the Chopin "was brought to an impressive climax after capable management of its technical demands, especially by the left hand. The waltz was perhaps the outstanding performance of the program in rhythmic flow and melodic charm." Oh, you might as well read the whole thing!

I'm sure my grandmother was very pleased. She sent her notices to her most important piano teacher, Edwin Hughes, and got the following letter back from him. In the letter Hughes mentions playing double piano concerts with his wife. She was also an accomplished pianist, Jewel Bethany Hughes. My grandmother cherished this letter for the rest of her life.


My grandmother continued to perform when she could. But she primarily taught music for the rest of her life. Around 1939 she accepted a position as music teacher at Highland Park High School in Dallas. This was at least in part because she wanted my mother to be able to go to Highland Park so my mom could meet the generally wealthy young men who attended the upscale high school. My mom had other ideas - but that's for a different blog. 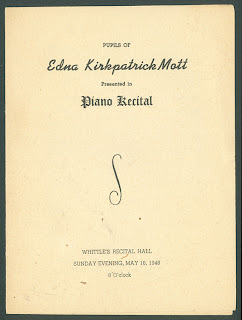 My grandmother also taught privately, and I have programs for many recitals she put together over the years - such as this one from Whittle Recital Hall in Dallas in 1948. In the mid-1950s my grandmother accepted a position teaching high school music in Wichita Falls, Texas.

Music was always an important part of her life. She tried to teach me to play the piano when I was little, but alas, I just didn't have the patience. And I think it may be more difficult to take classes from one's grandmother. You certainly can't fib about practicing when you live with your piano teacher!

In the early 1940s my mom got a home-recording phonograph and she made a small number of records of the family. There are two of my grandmother singing - she had a lovely voice - but it's such a shame that there are no recordings of her playing the piano.