I'm most sad to report the death of my cousin Diane Jeannette Finley Parotta. She died from cancer on October 25, 2012. She was only fifty-two.

Diane was born in Fort Worth, Texas, July 1, 1960, to Gayle Caldwell York and Dale Finley. She graduated from Alfred M. Barbe High School in Lake Charles, Louisiana, class of 1979. Shortly after the birth of her son, she moved back to Fort Worth where she worked as Chief Financial Officer for Ross and Matthews Law Firm. Diane is survived by her parents, Gayle York and Dale Finley; her sister, Karen Finley; her son, Anthony Parrotta; and numerous aunts, uncles, and cousins.

Diane was a lover of dogs, family, friends, and the outdoors. She was a member of the Texas Master Naturalist, the World Wildlife Organization, and the Association of Legal Administrators. Her passion for life is evident through her gardening, photography, and involvement in prairie restoration. Her extensive work and research in genealogy has brought the family closer than ever and will no doubt have a ripple effect throughout the rest of time.

Much of the above is from the fine obituary written by Diane's son, Anthony. It was Diane's work and research in genealogy, which Anthony mentions above, that brought Diane and me together. While this post shares the basic details of Diane's life I want to share how Diane's genealogy work brought us together - reconnecting two once very close branches of the family.

After the death of my mother, Mary Lee Mott Maxine (1924-2004), I felt very alone and isolated. My mom had been an only child and her mother had been an only child. The once huge extended Campbell family had been scattered and spread thin by time, geography, and marriage. I felt I had lost so much when my mom died; I desperately wanted to preserve her family stories, our family history - even if I had no one to share it with. I went out and bought Family Tree Maker. I began entering all the basic family data, and every couple days I'd upload it to the "World Family Tree" part of their website. Almost immediately I got an alert that an "exact match" had been found on another tree uploaded by a certain Diane Finley Parrotta. I had no idea who she was - neither Finley nor Parrotta were family names as far as I knew. I sent Diane an e-mail. She immediately wrote back, and over the next couple days we talked on the phone several times. Diane shared my e-mail with her mom, aunt, and sister. It became clear that two once closely intertwined branches of the family had been reunited. Here's our family connection in a nutshell:

Jeannette Campbell married Charles Cary Caldwell and they had one child, a son Charles. Sadly both parents died in 1924, leaving eleven-year-old Charles an orphan. He went to live with his aunt and uncle,  Mary Campbell and Louis Dillard Kirkpatrick (my great-grandparents), in Bridgeport, Texas..

Charles became, in effect, my grandmother's little brother and my mother's big brother. Charles was sixteen years younger than my grandmother and eleven years older than my mom. After my own grandparents divorced in 1928 my grandmother and mom spent much time living with Mary and Louis Kirkpatrick and their adopted son Charles. My grandmother was a Dallas/Fort Worth area music teacher, so essentially all holidays and all summer she and Mom lived in Bridgeport.

In the early 1940s Charles married Lois Parish. Sadly, Charles inherited his father's weak heart and he died in 1945 at the age of thirty-two, leaving behind his two young children, Gayle and Carol. Gayle is Diane's mom. The families stayed fairly close for the next decade or so.

Below is a photo of Diane's mom Gayle playing the violin (center top) and Diane's Aunt Carol (bottom left) sitting beside my grandmother Edna Claire Kirkpatrick Mott (center) at the piano. 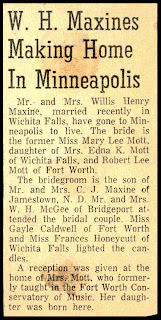 Diane's mom Gayle even participated in my parents' wedding party in 1958. But then our two families began to drift apart. People got married, they moved, relocated for graduate school, had kids, divorced, married again - names changed, addresses got lost.

That is, until 2004 when Diane and I found each other. We continued to share e-mails and phone calls. My reconnection spread to Dianes's sister, Karen, and especially to Diane's mom, Gayle. In 2009 we all finally met face-to-face. Around Christmas my partner and I spent several days in Fort Worth. We stayed with Gayle and had several good visits with Diane and Karen and their aunt Carol. The years melted away and the sadness and loneliness after my mom's death melted as well. The past didn't feel so lost anymore.

There was a future, too, as we all got to know each other through e-mails and especially Facebook. I deeply regret that the families lost touch for so long. Reconnecting would not have been possible without Diane's interest in the family, in genealogy, and in reaching out to connect with others.

I am so grateful to her for giving me my family back. Luckily she was surrounded by her large loving family at the end. I wish we had had more time to know each other. But she touched many people and many things, and the ripples of her life will radiate outward for a very long time.

A celebration of life will be held at 3 p.m. Tuesday, October 30, at The Unity Church located at 5051 Trail Lake Drive, Fort Worth, Texas 76133. In lieu of flowers, contributions can be made in Diane's memory to the Humane Society of North Texas at 1840 East Lancaster, Fort Worth, Texas 76103. Arrangements have been made by the Major Funeral Home & Chapel, Fort Worth, Texas, telephone 817-568-0440.
Posted by hungrytigerboy