One of my cousins is writing a history of the Civil War career of one of my ancestors: Captain John Dillard Kirkpatrick (1838-1895). John was the brother of my great-great-grandfather William Henry Kirkpatrick. This cousin and I have been exchanging genealogical information for a number of years now, including the various Civil War letters each of our families inherited. There is one thing I have not been able to share, as it can't be photocopied, scanned, and e-mailed. 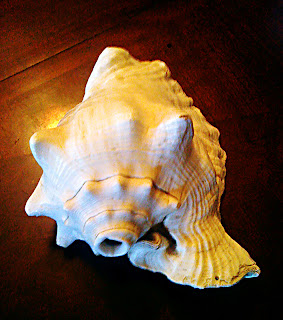 It is a large pink conch shell that has probably been in the family for a good two hundred years. When I was little I remember the shell being in my grandmother's room. I would come in and look at it, and she would tell me the story. The shell had belonged to Grampa Kirkpatrick and it had hung near the front door of their big house. When the day's work was over, Grampa Kirkpatrick would go out on the porch, take the shell from its hook, and he'd blow into the shell - which was sort of like a horn - and he'd call the slaves in from the field.

This was all very abstract to me when I was a child. There seemed a distinct separation between the past, slavery, the Civil War, etc., and the very liberal and progressive family I grew up in. My mom had been deeply involved in the civil rights movement from the mid-1940s.

But as I got deeper into genealogy, the issue of slavery became much more problematic. If one starts looking at U.S. Slave Schedules and going through Trust/Deed books and seeing one's relatives buying and selling human beings, reading Last Will and Testaments where relatives are leaving certain human beings to others, well, it becomes very real. I'll be talking a good deal more about slavery issues in future posts.

But in my research one thing puzzled me. I could find no clear evidence for which particular "Grampa Kirkpatrick" the shell belonged to. The family stories clearly implied it was Anderson Kirkpatrick (1808-1887), my great-great-great-grandfather. But I can find no evidence that Anderson owned slaves. Perhaps his father John Kirkpatrick (1770-1808) owned slaves - indeed, I think it likely. Surviving property records and the Slave Schedules show many of Anderson's ancestors owning slaves, and three of his brothers did as well. But the solid documentation of the Kirkpatrick brothers' slave holdings only made the absence of such records for Anderson more puzzling.

Anderson and his sons were well-off, well-educated, and very religious. It would not be out of the question that Anderson had not held slaves. I just wish I had positive proof one way or the other, as either scenario creates a better picture of the man and his children.

But there is the story of the conch shell. Either Anderson owned slaves or the shell was his father's or possibly the story got slightly off and the shell belonged to my other great-great-great-grandfather, James Madison Hunt (1810-1860). JMH was the father of Macarina Bridges Hunt who married Anderson's son, William Henry Kirkpatrick. My grandmother, who first told me the story of the shell, knew both of these people, William Henry and Macarina Bridges (her paternal grandparents), quite well. Macarina died when my grandmother was twenty-four. So my grandmother heard the story from two people who had reached adulthood before the Civil War. Macarina grew up in a slave-owning household. In the 1860 U. S. Slave Schedule her father, James Madison Hunt, is listed as owning seven slaves.

So I don't think it unlikely that Macarina Bridges Hunt Kirkpatrick might have told the tale to my grandmother by simply saying this shell belonged to Grampa - meaning Macarina'a father and not Grampa Kirkpatrick. There's probably no way to know and in either case at least one of my great-great-great-grandfathers owned slaves. And I now possess the shell one of them used to announce the end of the work day.

Well, the original purpose of this blog post was to be able to share information about the conch shell - but I felt very wary of romanticizing the past and wanted to balance family nostalgia with a little cold history.

The conch shell is very old and worn. As you can see in the photo below, many layers of shell have been chipped off in the last two hundred years and the grip area has been rubbed smooth. You may also notice a small hole drilled in the upper lip. This is where the ring or wire went through, enabling the shell to be hung at the front of the house on its hook. 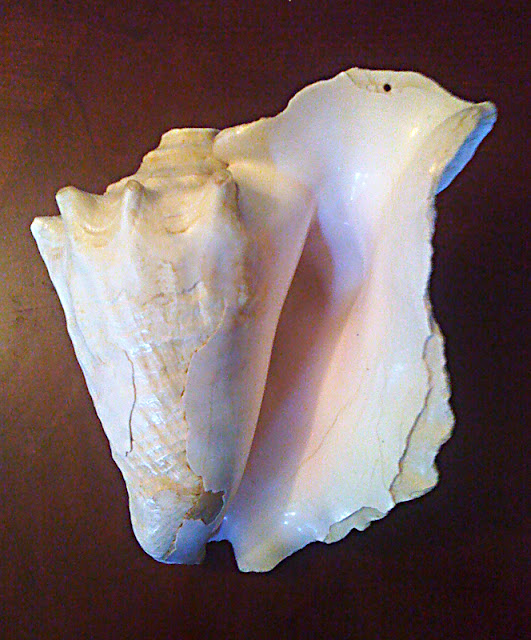 When I was little I would pick up the shell and blow into it and nothing happened. My grandmother would tell me it was very difficult to blow and get the right sound. But when I was in fifth grade I took French horn for a year and I quickly realized the same technique of basically blowing a "raspberry" into the French horn would work on the Kirkpatrick Family conch shell. It worked. My mom suggested I should learn to play bagpipes. I declined.


Below you will find a link to play a short MP3 sound file of me blowing the conch shell.
Click Here to Listen to the Conch Shell
Depending on your audio player you may need to click the little PLAY arrow. 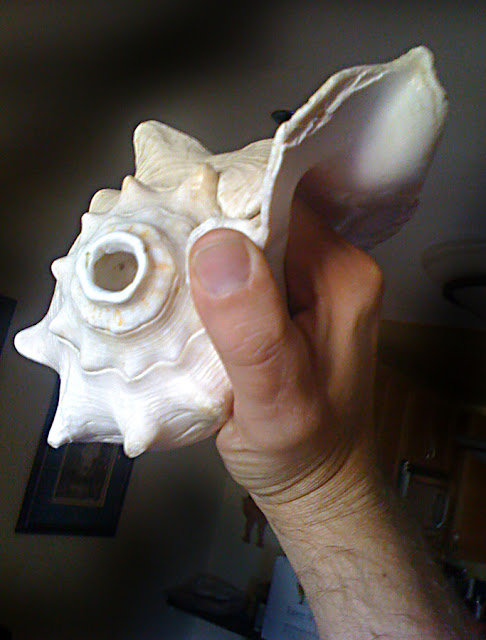