William Henry Kirkpatrick died in1908 and this photo predates his death, as he is sitting on the porch with his wife, Macarinah. Mac lived in the house until her death in 1921. Here she is late in life, standing in the front yard, showing the view toward the street.


My memory is that my mom showed me this house a couple times when I was little and finally in 1993 on her last trip to Bridgeport. As I recall, it was on Stevens Street somewhat west of my great-grandparents' home.

A couple years ago Royce Raven, a historian in Bridgeport, sent me a photo of what he thought might be the house which stands at 1400 Stevens Street.


Now, clearly the photos have some differences - mainly that the newer one shows a house nearly twice the size of the Kirkpatrick house in the 1908 photo. However, I was struck by how similar the right-hand side of the house was to the 1908 home - the narrow window (ignore the shutters on the newer photo) and the unusual rounded porch design. Given that the two images were taken from a very similar angle and position, I couldn't resist doing an overlay in Photoshop.

Below is a more transparent version that better shows how the two houses align. The pointed roof and the rounded porch seem virtually identical and the window lines up exactly, as well.


The house is approximately where I remember my mom showing it to me in 1993. And given the architectural matches, I strongly suspect this is the old Kirkpatrick home. A couple of my cousins are not convinced. I look forward to examining the house at 1400 Stevens if it is still standing when I next get to Bridgeport. I heard a couple years ago it was being eyed as a future parking lot.

One of my cousins who has not previously agreed with me about the identification of this house suggested that just possibly the original photo was printed backward and that I might try flipping it. I have now done so and (if that's the case) I am more sold than ever! Here's the same overlay, but with the pre-1908 image flipped. 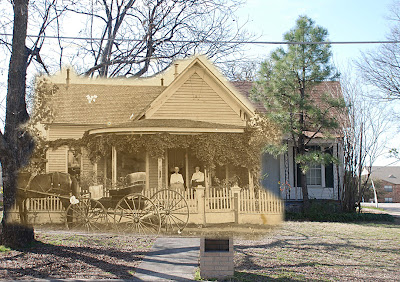